How one should not make a solar collector 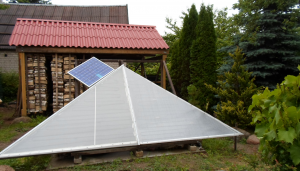 The frame holding the collector is quadrangular, as I will have to remake it when I have a chance. After 3 seasons polycarbonate covering turned a bit yellow, even though the collector itself is holding well. Aluminum pipe connections are watertight. On a sunny day, when I blocked the end of lower pipe and filled the heat exchanger piping with water, all the water in the heat exchange reached the boiling point and evaporated.

5 Responses to How one should not make a solar collector